A recent study, affiliated with UNIST has measured and controlled the temperature of individual graphene

An international team of researchers, affiliated with UNIST has announced that they have succeeded in measuring the tensile strength of centimetre-scale monolayer graphene for the first time, using camphor as a naturally-volatilizing support.

This study has been led by Distinguished Professor Rodney S. Ruoff and his research team from the Center for Multidimensional Carbon Materials (CMCM), within the Institute for Basic Science (IBS) at UNIST. Their findings, published in the May issue of Advanced Materials, suggest that this trick could be applied to transfer and study other challenging 2D materials.

Graphene is one of the stiffest and thinnest materials in the world. However, it has been difficult to determine the mechanical properties of monolayer graphene pieces, as they are bigger than a few micrometers. Therefore, moving such an ultrathin film to a standard testing apparatus has not been possible.

Recently, new and impressive characteristics of ultrathin films have been unveiled, with promising applications in microelectromechanics, optoelectronics, and biology. For example, the combination of graphene’s transparency, impermeability, conductivity, and elasticity could be used for flexible electronics, transparent protective coatings, and barrier films.

Measuring the tensile strength of materials involves pulling samples until they break. However, testing 2D materials is a complex task. Traditionally, a layer of another material (substrate) is used as a “tray”, to help with the transfer and to give these ultrathin films some support. Such substrates have pros and cons: there is the risk of damaging the film when the substrate is peeled away, or if the substrate layer is too thick, distinguishing the properties of the substrate from the ones of the 2D material of interest becomes impossible.

In this study, the team used camphor as a transient support. Camphor, which is founded in the bark and wood of the camphor laurel tree, is a waxy, flammable, white or transparent solid with a strong, aromatic odor. It is poorly soluble in water, but highly soluble in organic solvents. Therefore, it is often used as a preservative or an embalming fluid and also for medical purposes.

What differentiates this from conventional methods is that it is sublimed away in air at room temperature naturally, or at higher temperatures for faster processing. Thanks to this method, ultrathin films with an area larger than 1 cm x 1 cm are transferred without damage, then the camphor layer disappears in the air without leaving traces. In this way, tensile measurements were made on centimeter-scale 300 nm-thick graphene oxide film specimens, almost ten times thinner than previously reported. It was also possible to work with a graphene oxide film that was only 35 nm thick, and suspend it over a 1 cm x 1 cm hole. 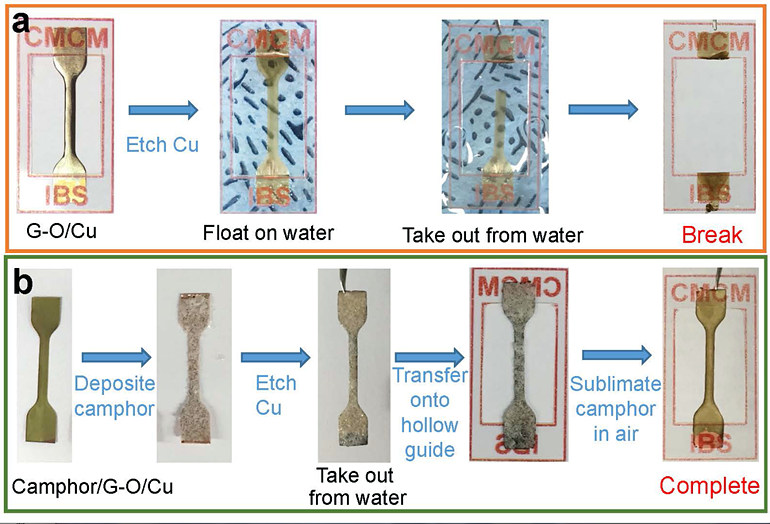 Moreover, the IBS researchers tested the new camphor-method with one-atom-thick graphene films. In this case, stretching a freestanding monolayer 2D film is not yet possible, and a polycarbonate (PC) film is used as a support layer. Without camphor, the thinnest PC/monolayer graphene assembly tested was around 1 μm thick, and graphene’s mechanical properties could not be obtained because the thick PC film dominates the response. However, IBS scientists managed to distinguish monolayer graphene properties using the camphor method and a 100 nm thick PC substrate.

The tensile tests demonstrated that these large-scale samples do have high stiffness. The team measured graphene mechanical properties in terms of the Young’s modulus, which characterizes the intrinsic stiffness of a material. The study reports that centimeter-scale polycrystal monolayer graphene has a Young’s modulus of 637-793 GPa, but that single-crystal graphene had high-end values at or near 908 GPa. As a matter of comparison, a block of high strength steel has a Young’s modulus of about 200 GPa, but accounting for the higher density of steel, that is, corrected for weight, the intrinsic stiffness of large-scale graphene is about 20 times higher.

“I think this method might become a standard around the world for testing single layer 2D materials, including graphene at length scales meaningful for applications,” notes Distinguished Professor Ruoff, director of the IBS Center for Multidimensional Carbon Materials.

The team expects that now they have this technique in hand, their next challenge is to produce graphene sheets that are not only astonishingly stiff, but also incredibly strong.

“Strong carbon-carbon bonds confer graphene with an impressive ideal strength, which is however lowered if there are defects in its structure,” explains Bin Wang, the first author of the study. “The ideal strength of graphene is about 130 GPa, second only to the ideal strength of diamond along a particular crystallographic direction (240 GPa). But these are calculated strengths, and are never obtained for “large” specimens, like a centimeter or larger—because such specimens always have defects, also called flaws, like small cracks.

He adds, “Now that we have this new method for measuring large graphene specimens, we can begin to understand why the strength for our graphene samples, even the single crystal graphene samples, is typically around 8 GPa, and not higher. Understanding this will provide us a “road map” to make graphene that is much stronger—that breaks at a much higher value of percent elongation,” continues Professor Ruoff. “And when we do that—that will change the world.”

Notes for Editors
The online version of the original article can be found HERE.