An international team of researchers, affiliated with UNIST has introduced a new method to convert inexpensive polycrystalline metal foils to single crystals with superior properties.

Published in the online edition of Science on October 19, industrial scale production of single-crystal metal foils would now be possible from this discovery.

The structure of most metal materials can be thought of as a patchwork of different tiny crystals, bearing some defects on the borders between each patch. These defects, known as grain boundaries (GBs), worsen the electrical and sometimes mechanical properties of the metal. Single crystal metals, instead, have no GBs and show higher electrical conductivity and other enhanced qualities that can play a major role in multiple fields, such as electronics, plasmonics, and catalysis, among others. Single crystal metal foils have attracted great attention also because certain single crystal metals, such as copper, nickel, and cobalt, are suitable for the growth of defectless graphene, boron nitride, and diamond on top of them.

Single crystals are normally fabricated beginning with a ‘crystal seed’. Conventional approaches, such as the Czochralski or Bridgman methods, or others based on the deposition of thin metal films on single crystal inorganic substrates, achieve small single crystals at high processing costs.

To unlock the full potential of such metal structures, the research team invented the “contact-free annealing” (CFA) technique. CFA involves heating the polycrystalline metal foils to a temperature slightly below the melting point of each metal. This new method does not need single crystal seeds or templates, which limit the maximum crystal size, and was tested with five different types of metal foils: copper, nickel, cobalt, platinum, and palladium. It resulted in a ‘colossal grain growth’, reaching up to 32 square centimeters for copper. 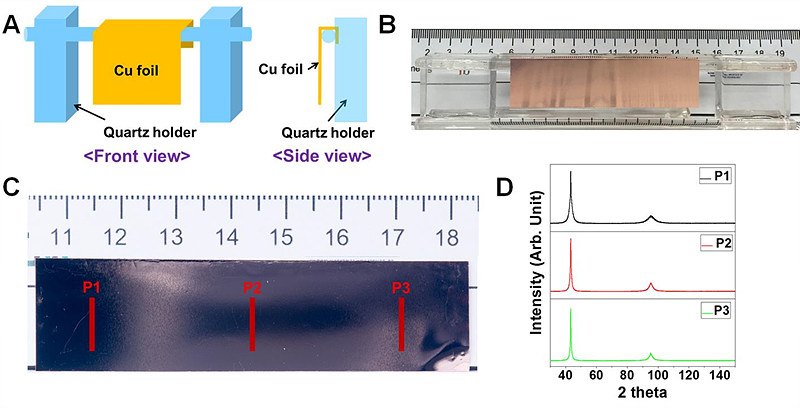 The scientists also achieved single crystals from nickel and cobalt foils, each about 11 ㎠. The achieved sizes are limited by the size of the furnace, so that one could expect production of larger foils with ‘industrial’ processing methods.

For platinum, resistive heating was used because of its higher melting temperature (2041 K). Current was passed through a platinum foil attached to two opposing electrodes, then one electrode was moved and adjusted to keep the foil flat during expansion and contraction. The research team expects this trick to work for other foils, because it also worked for palladium.

▲ The research team contributed a model and theoretical calculations on ‘colossal grain growth’ that was observed and studied through experiments. Professor Shin drew attention to the importance of the initial ‘texture’ of the polucrystalline metal foils and the role this plays in colossal grain growth.

“Now that we have explored these five metals and invented a straightforward scalable method to make such large single crystals, there’s the exciting question of whether other types of polycrystalline metal films, such as iron, can also be converted to single crystals,” noted by Dr. Sunghwan Jin, the first author of the study and his advisor, Distinguished Professor Ruoff.

Distinguished Professor Ruoff enthusiastically concludes, “Now that these cheap single crystal metal foils are available, it will be tremendously exciting to see how they are used by the scientific and engineering communities!”